Coronavirus has been spreading rapidly across the world, affecting 175 countries and claiming more than 21,000 lives.

There are more than 470,000 confirmed cases worldwide. Southern Europe is now at the epicentre of the crisis and the US is also facing a surge in cases.

This series of maps and charts will help you understand what is going on.

1. The global pandemic continues to grow

The virus is spreading rapidly in many countries, with nearly 400,000 confirmed cases outside China, according to the latest figures from Johns Hopkins University.

The true figure for the number of people with coronavirus is thought to be much higher as many of those with milder symptoms have not been tested and counted.

This information is regularly updated but may not reflect the latest totals for each country.

Italy has the highest death toll of any single country in the world with more than 7,503 deaths, many in the worst-hit region of Lombardy.

The US, Spain, Germany and Iran also have a large number of confirmed cases.

The World Health Organization (WHO) has said that the US could become the next epicentre of the pandemic, given the "very large acceleration in cases".

New York is at the centre of the outbreak in the US, with more than half of the country's almost 60,000 cases.

Governor Andrew Cuomo warned the illness was spreading faster than "a bullet train" in his state. Spanish Prime Minister Pedro Sánchez has described his country as being "at war" with the death toll now at more than 3,600.

In India, a 21-day lockdown is beginning across the country.

China, on the other hand, says it has now all but stopped the spread of the disease, and that all new recorded cases are imported infections from other countries. 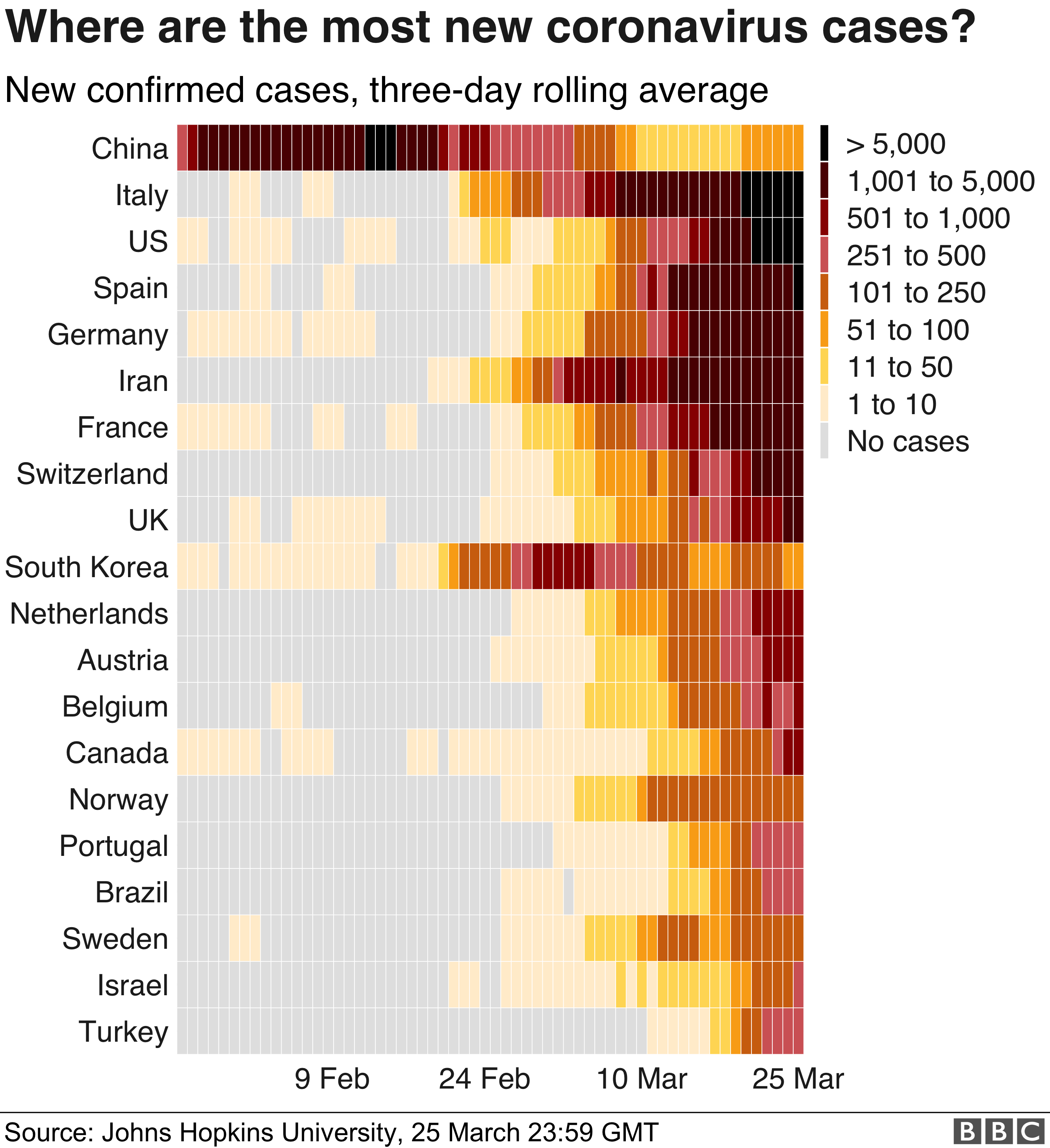 The coronavirus outbreak was declared a global pandemic by the WHO on 11 March. This is when an infectious disease is passing easily from person to person in many parts of the world at the same time.

More than 80,000 people in China were diagnosed with the infection after its emergence in the city of Wuhan, Hubei province, in December.

But after the recent turnaround, more than three months later, it is planning to partially lift the lockdown in Wuhan on 8 April.

Other countries around the world are ramping up measures to try to slow the virus down. Governments have halted flights, locked down towns and cities and urged people to stay at home.

2. Millions living under restrictions on their movement

India is one of the latest countries to enforce a lockdown, meaning its 1.3 billion residents are now forbidden from leaving their homes for a few weeks at least.

That means more than a quarter of the 7.8 billion people in the world are now living under some form of restrictions on their movement and social contact due to the coronavirus.

People in major cities like London, Barcelona and New York are now moving around far less than they were a few weeks ago, according to data from the travel app Citymapper. 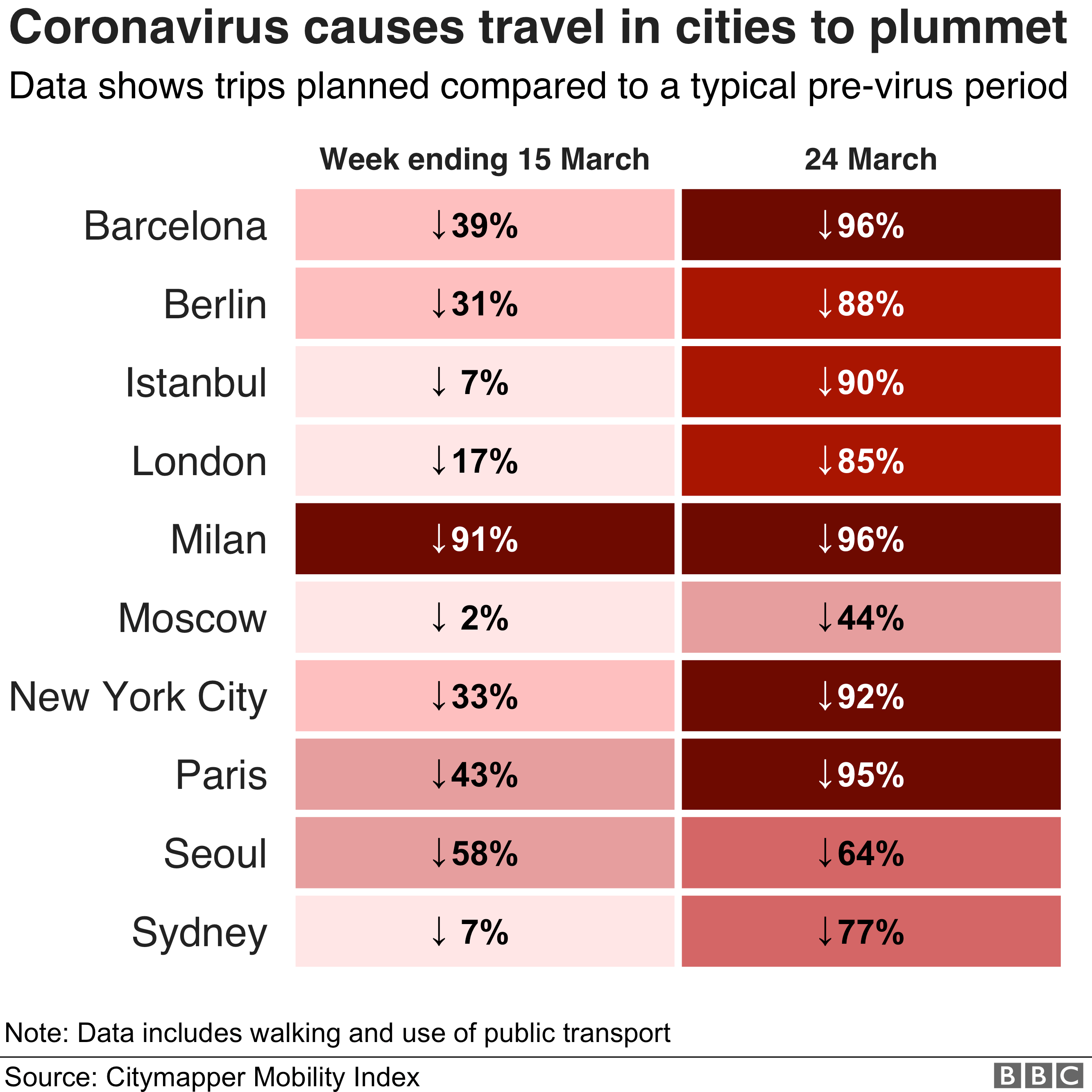 The data also shows that while Milan in northern Italy has been locked down for several weeks now, many other cities have only been restricting movement in recent days.

While movement is also down in the South Korean capital Seoul, the city hasn't ground to a halt like European capitals despite facing huge numbers of coronavirus cases - a sign of the country's decision to focus on widespread testing and contact tracing rather than social distancing.

3. The virus has killed more people in Italy than China

Italy currently has the most confirmed cases outside China, where the virus originated.

It has around 7,000 fewer confirmed cases than China, but its death toll of 7,503 is more than double the official toll in China.

On Wednesday, a further 650 deaths were reported. 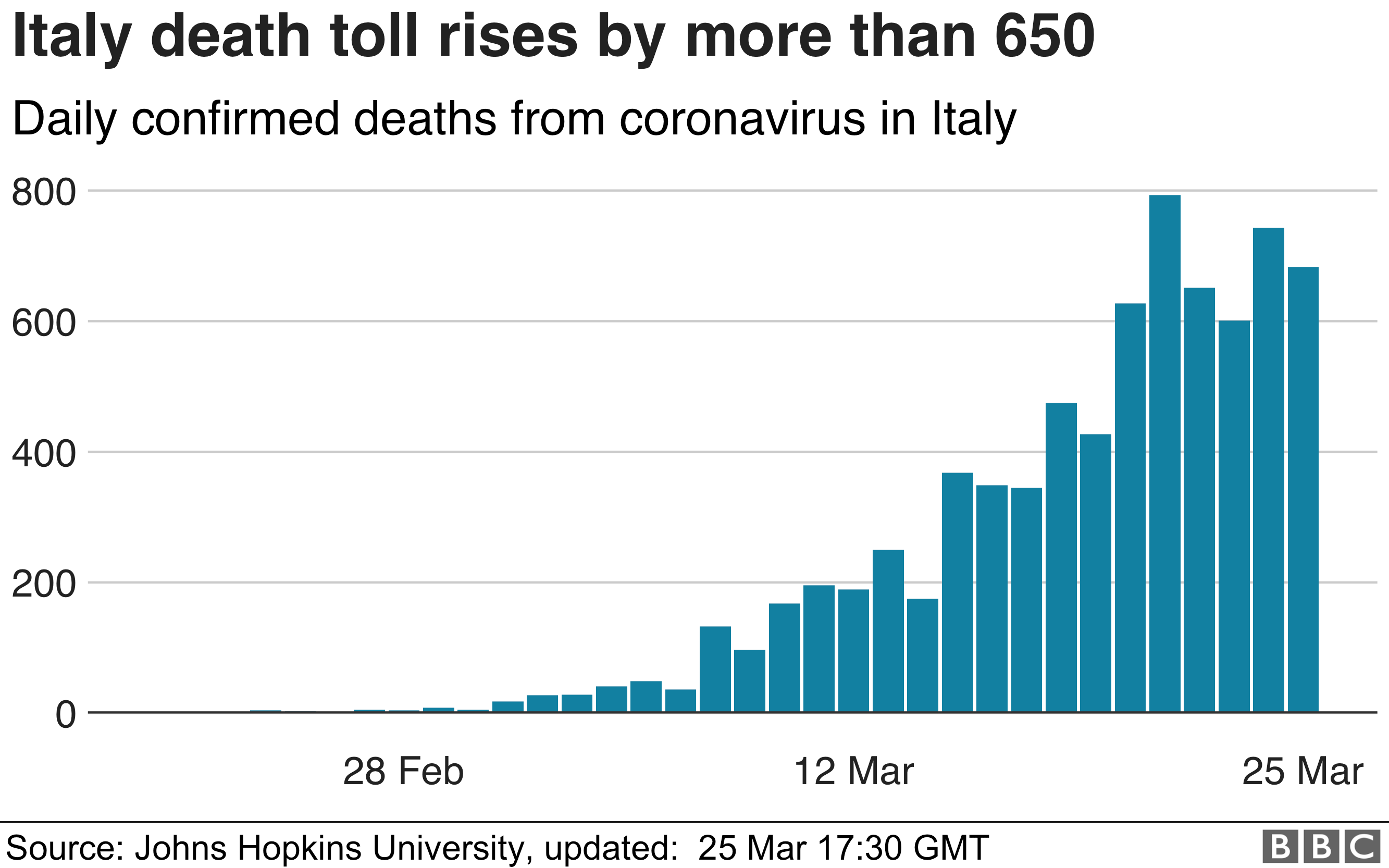 The majority of Italy's deaths have occurred in the northern Lombardy region, which contains the city of Milan. Hospitals there are reportedly at breaking point and retired doctors and nurses have been asked to return to work.

The lockdown, imposed on 12 March, has now been extended beyond the original 25 March end date.

4. Numbers across Europe are rising

Other European countries have seen steep rises in infections and deaths, and the region has become the new epicentre of the crisis.

As well as Italy, Spain, France, Germany and the UK now have thousands of confirmed cases each. The toll in Spain, at more than 3,600, also surpasses the number to have died in China. Germany's Chancellor Angela Merkel has warned that up to 70% of its population - some 58 million people - could contract coronavirus. However, some German virologists dispute the high figure, suggesting a worst-case scenario of 40,000 cases.

Prime Minister Boris Johnson announced a further clampdown in the UK on 23 March, urging people to stay at home to avoid unnecessary transmission of the disease.

He said the tightening of restrictions would last for an initial period of three weeks. 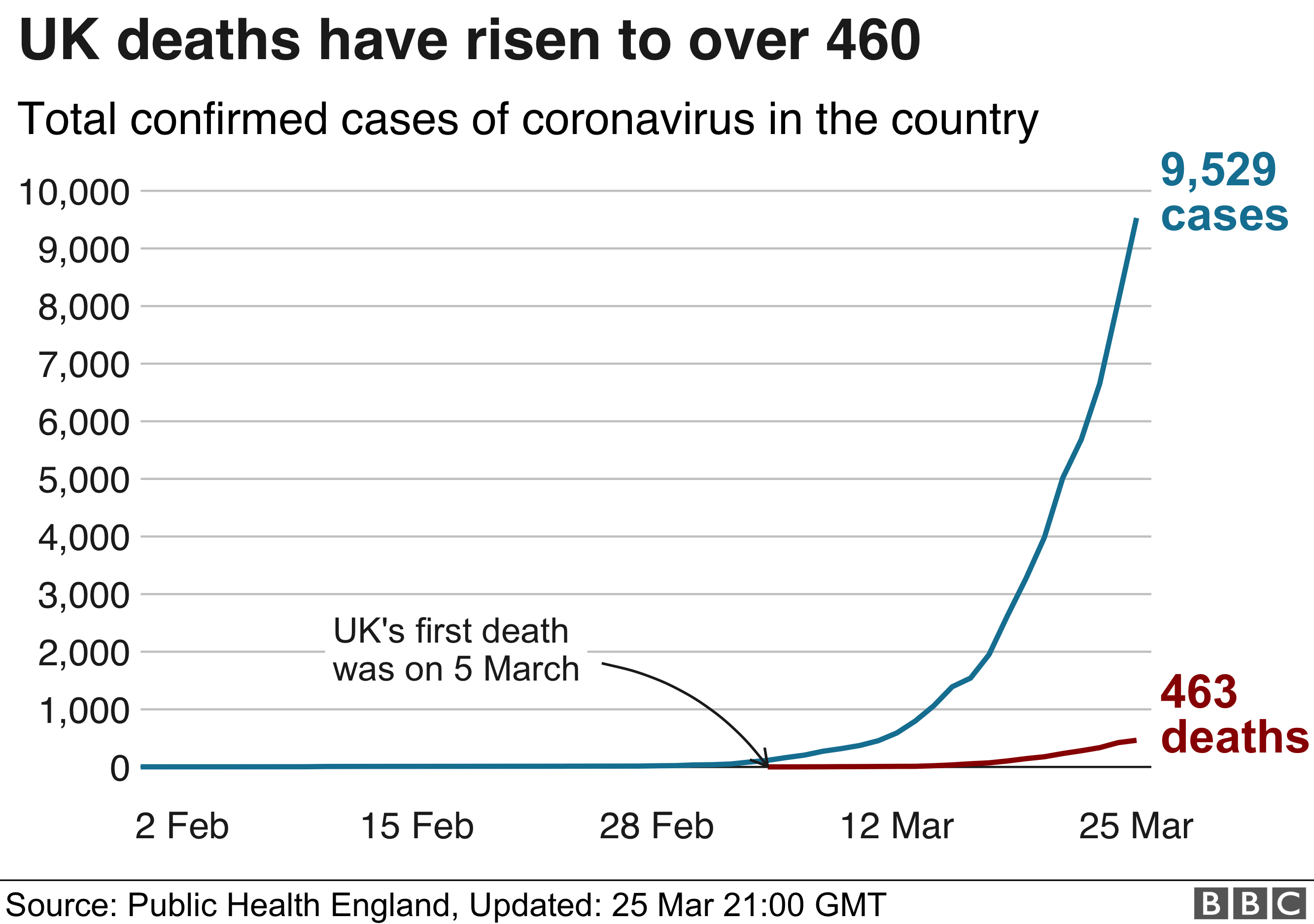